I have a friend who is a Drugs Counsellor. Part of his job is to try and convince young people to give up drugs and live a drug-free life. He says it’s a difficult task. His biggest challenge, he told me, is not just convincing the kids that they can have a rewarding life without the constant thrill of exciting chemicals. It’s the sheer hard work of persuading them to stop doing something that’s become a habit and a regular part of their daily routine. Well, that’s a problem in every aspect of life.

Still, with his years of experience, he’s come up with what he calls his ‘Formula for Success’. I was impressed. It’s a procedure that will work with any change you want to make. Let’s go through it.

Number One is to ask yourself: ‘What am I doing - right now?’ AND ‘If I carry on down this road, where will it lead me?’ That last bit is problematical, of course. The sheer definition of a Drug Addict is that they are living for the moment, the next fix, and completely uncaring about tomorrow. The answer to the question for them, of course, is - ‘Probably, in ten years, dead’, and no one wants to admit to that.

Strangely, the first bit comes out as a problem, too, because, my friend says, darn few of us are ever capable of being completely honest. ‘What are we doing?’ Well, if we’ve got a chemical addiction, then the answer is that we’re killing ourselves, one way or another, some time, sooner or later. But, if we’re eating junk food and taking no exercise, then it’s the same answer, and who wants to face up to that. Being a couch potato doesn’t seem like committing suicide, but the outcome is the same. It just takes longer.

Stage Two goes like this: ‘Stop what you’re doing now. Do something else. Choose a different road’. Apparently, that first phrase is a real stopper, because, he says, sure, people want things to improve, but they don’t want them to change. People say things like, ‘I want to join a gym and get fit’. So, you might say, when are you going to start? Ah, they say, I go to the pub three nights a week now, so I’ll just have to fit in the gym on the other nights. The better thing, of course, would be to stop the pub visits - if you really want to get fit - and substitute the gym trips. Not easy to do. People come up with new ideas - like joining a gym - and imagine they can just add them on to an already busy schedule. It doesn’t work. If you want a new habit, the first question to ask yourself, apparently, is: ‘What am I going to give up?’ (It’s the same in my field - book writing. People say to me, constantly, ‘Oh, yes, I’d like to write a book too, but I just don’t have the time’. When I suggest to them that they might need to sacrifice a few pub nights to make the time to write, they just look resentful, as if drinking beer is as essential to them as breathing fresh air. News Flash: it isn’t.)

The second part is just as problematical, it seems. The idea of ‘doing something new’ sounds quite attractive at first, but when you tell a person who wants to lose weight that the new diet means not only having salad for lunch, but NOT having the cream buns in the afternoon, they find it hard to adjust. But it is a choice, pure and simple. You can’t just add the new on top of the old. It would be like some friends I once shared a house with. Their idea of ‘getting fit’ was to run twice around the park at the bottom of the road. Good idea. But then they came back, breathing heavy, slumped down in front of the TV and shared crisps and lemonade. They didn’t seem to think that the exercise was being cancelled out by the snacks. No, the only thing that would have worked for them: do the run, drop the crisps and sugar water. (They wouldn’t listen to me.)

The third part can be even harder to adopt, especially if, as my friend tells me about many of his clients, people like to pretend, ‘No, I’m not a drug addict. I just like to use illegal drugs, now and again.’ Oh, yeah? So, in their heads, all they have to do is cut it down a little more, and they’ll be fine. If you ask them to say, ‘I lead a drug-free life’, they get nervous and say, ‘What? I can never have them ever again?’ It seems like to them like they’re sacrificing a lot. It’s a whole road they have to quit. But, if the road they’re on is leading to an early death, then there’s no other way. Get off that path and head in another direction. Don’t imagine you’ll be safe by carrying on down that same old road - but thinking you will save yourself by trying really hard to move a little slower.

The Third stage sounds easy. ‘Reward yourself.’ The problem is, well, you already know what your favourite reward is. If you take drugs, a ‘reward’ is more drugs. If you need a diet, your regular emotional boost is more food. So, you’ve been really ‘good’ and cut down on eating? Right, you go out and buy a really big cake, (AND tube of ice-cream. You deserve it, right?) This instruction should say, ‘Find a way to reward yourself’, (which may have to be new and not be related to the problem you’re trying to solve). A reward for improving your eating habits might be a day out in the country, or a ticket to a concert of your favourite singer. But you’ll need two things: One, it has to make sense to you. If someone says, ‘My reward is a visit to my Grandma’, don’t knock it. That could be really important to them. Or they might say, ‘My reward is a download of Adele’s latest album’. Well, that’s their taste. Let them have their fun. And two, it’s better if there’s some immediate and obvious link. So, if a man comes round your office offering cakes at 11 o’clock and you’ve avoided stuffing yourself for a week, then think of all the money you’ve saved, and say something like, ‘Right, I deserve a trip to the hair stylist’, (or the Nail Bar or the Laser game room).

But there’s a Three too: don’t give up one bad habit and put another bad habit in its place. If you say, ‘I’m giving up illegal drugs and going to spend more time in the pub with my mates’, be aware that alcohol instead of cannabis is not a helpful swap. Giving up drugs and taking up marathon running is a much better idea. And note, that ‘giving up’ is still the biggest achievement. Creating a vacuum in your life by stopping some destructive habit is a good way to make room to create more productive pastimes. In fact, says my mate, if you’re not actually stopping something, then it’s highly unlikely the new plan will ever get established. You need elbow room. You need space to maneouvre. You need to create some space in your head for thinking about your new life, walking down that new road. Telling the old ways of thinking to move on and move out, is the best way - maybe the only way - to guarantee success.
So, here it is again, in summary:

Stage One: ask yourself - ‘What am I doing - right now? and ‘If I carry on down this road, where will I get?’ 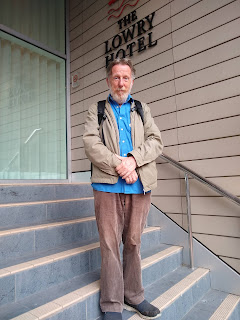 Posted by Mike Scantlebury at 7:41 pm No comments: