Every day is a Learning Day, a chance to receive new information, but it’s rare you get a real, honest-to-goodness, slap-in-the-face piece of Inconvenient Truth. For me, it happened recently, the day I was busy telling people that I wrote the ‘Mickey from Manchester’ crime fiction thriller series of novels, and one man joked: ‘Oh, Manchester. I can imagine what that’s like!’

The point is, of course, that No, he can’t imagine what that’s like. He can’t. He can’t know what it’s like if he doesn’t know, and he can’t ‘imagine’ if he has to make it up, and anyway, I don’t write about the ‘real’ Manchester - so he can only guess what that might involve!

One thing at a time. For a person who lives in Southern England, they might think they ‘know’ about Manchester, in the sense that they hear about it, maybe on radio or in social media, and maybe see it, on The News, or other television programmes, (like the recent BBC documentary about the housing boom in Manchester). But, if it’s not housing, the ‘news’ about Manchester is likely to be only about drug gangs, shootings and stabbings, or perhaps, the occasional terrorist outrage, some bomb or other. These are the regular components of News bulletins. If you watch such stuff, you’re liable to see distraught residents, bemoaning the latest assault, and you’re liable to think, ‘Wow, I certainly don’t want to live in that War Zone’. In which case, you might be forgiven for forgetting that knife crime in London is higher than anywhere else in the country, and that violent crime in Glasgow is the highest in the United Kingdom. But Hey, we’re talking Facts here, and I’m as dependent on the media News as you are, for hearing about True Crime in this city. And, unfortunately for you, I don’t usually bother with such things, anyway. I write Crime Fiction, which makes my original Critic’s comment irrelevant. Even if Manchester was as gun-totin’ as 1930s Chicago, the only way he could be correct that he ‘knew’ what my books are like, is if I did him the honour of limiting my Manchester novels to reflecting life in this place, as it is. I don’t. Far from it.

But that’s talking about mere impressions gained from the Media. What about actual experience? What if you knew this city? What if you had actually visited? Well, I’ve had plenty of relatives come to stay, usually for short amounts of days, and I’ve spoken to people who have been here on business. All those people agree that they have only seen a small amount of the place while they were here, and, since Manchester is a city of a million people, it would be true to say that they hadn’t talked to anything but a fraction of the residents. So, visitors get a fragmentary idea of what the place is like, simply because they haven’t got time to do anything else. But, of course, it’s worse than that. I met a young man in Oxford who had been at University in Manchester. For Goodness’ sake, he was here for three years! And yet, he knew the Uni buildings, where to go for lectures and tutorials, he knew the sites of lots of bars, takeaway food shops and night-clubs, but his sojourn in the city hadn’t given him any information - as far as I could tell - about the culture, the history, or recent crises, conflicts and on-going issues. (Some student! I hope he learned something while he was here.)

But, the one thing my young student friend and I could agree on was where things were, not just shops, but also concert halls and football stadiums. Plus, he knew how to get around, the taxis, trams and trains. Well, as I’ve often said: ‘I always get the geography right’. If my hero Mickey walks down Chapel Street in Salford, passing Salford Central train station on his right, and crosses the road and walks up the steps of the URC church, you can be sure those places are there. They actually exist. Now, you might ask, is that because, Mike, you’ve taken advice from ‘How to Write 101’ and you ‘write about what you know’? No, not really. Not only did I learn from attending Writing Workshops, I went on to teaching them myself, and my advice evolved into something different. I told my pupils, ‘START by writing ‘what you know’, and make that the launchpad into your story, when your imagination runs free’. In my example, my hero Mickey walks into the church to attend an Art Exhibition, (which actually happened), but then someone asks him for help in bringing some tables down from the attic. The truth is that the building doesn’t have an upper floor, let alone an attic, (it was blown off by a falling bomb in the Second World War), but - in the story - Mickey gets trapped and has to break through into the building next door, then open a hatch to drop into an office there, much to the surprise of the workers. The sad truth is that the church has no connection with the buildings adjacent. In fact, there is an alleyway between the church and the nearest building. Mickey’s entrapment, AND his escape - dear reader - is total imagination.

I’m sorry, I can’t apologise for that. It’s true I write books under a series heading of ‘Mickey from Manchester’ and that most of the bits of the story that concern the city are fantasy, (apart from the geography), but then, I do advertise it as Crime ‘Fiction’, so I have never set out to mislead anyone. On the contrary, I seek to entertain. You might say I am basing my tales in a ‘Mythical Manchester’, a place that only exists in my imagination, but, you see, what I’m trying to say is that MY imaginary land is no more ‘real’ than the imaginary hell-hole of drug gangs that the first speaker assured me was the ‘true’ place, somewhere not worth reading about. In fact, it might be true that my stories set in HIS imagination would be depressing, since all his myths are the negative, threatening and violent kind. Luckily, my ‘mind palace’ is nothing like as downbeat as his. It’s made-up, which means that in my world the Good Guys win and Justice is served. As author, I’ve got the power to deliver that. Oh, and one more thing. Yes, my stuff is made up. So, my protagonist is called - Well, his name isn’t even Mickey! That’s just another ‘mystery’, revealed in a recent volume. ‘Mickey’ is his Dad. If you want to find out my hero’s real name, you’ll need to read Book 17 of the related series, the ‘Amelia Hartliss Mysteries’. Sorry, but it’s true! 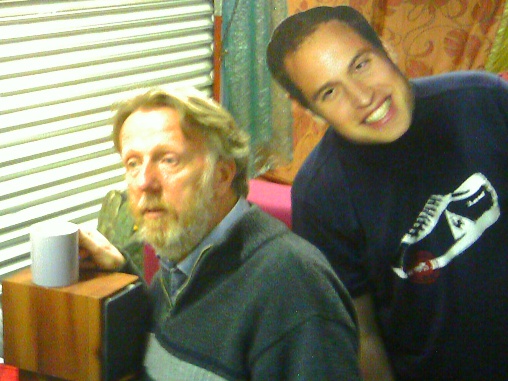 Author Mike Scantlebury takes a selfie with a friend

Posted by Mike Scantlebury at 2:16 pm No comments: