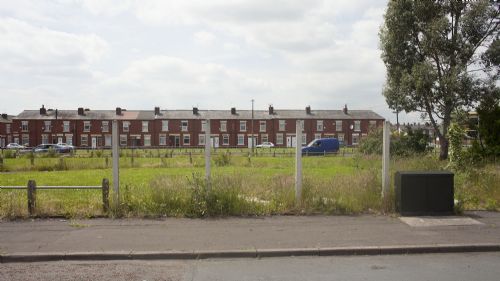 The media in Britain don't do complicated.

In the summer of 1999, the then British Home Secretary visited the derelict area of Langworthy in Salford, North West England. He was shocked by the appalling conditions, the boarded up houses, the residents with no hope. Local people, angry and frustrated, shouted at him to 'do something'; six months later, it was announced that thirteen million pounds of government grant was heading their way.

Did it work? Has the area improved? More than a dozen years later, I wanted to know, so. I asked local people, and their answer was clear: 'Yes and No'. Yes, they said, some of the houses had been improved, the area was tidied up, most of the boarded-up houses had gone, a new primary school had been built, and the small local park was greatly improved. No, they said, the shops looked better but had no parking; the biggest bar in the area had been planned to be renovated but instead, was being demolished; the streets that had their houses demolished were now just empty patches of grass, waiting for the economy to improve before anyone could afford to build new properties.

It was a confused picture. Unfortunately, the media can't handle that. The local newspaper is still using pictures from its archives of derelict houses to represent Langworthy, or pictures of the new empty plots as representing the whole area and talk about 'failure' and 'broken promises'. They can't discuss good and bad - at the same time. They can't do both. They can't say, as the local people are telling them, that there have been some good things coming out of all the grants put in and the works done, but there have also been some real disappointments. In particular, the Press simply fails to understand that a hefty proportion of the original, dissatisfied residents of Langworthy have simply moved on, sold their houses, maybe, but relocated anyway, setting up home in a new area, with fresh challenges and new rewards. They aren't there to comment. How do those particular people feel about what was done to their neighbourhood? We'll never know.

The media prefers simple. It wants to see some simplified 'before' and 'after' pictures, and come to a hasty conclusion. It doesn't really want to hear what ordinary people say, unless they can keep it short and keep it simple. If they try to seriously express themselves, the reporters can't cope and the camera people turn off their cameras. They want sound bites: they don't want explanations.

In 1999, we should have seen it coming. That year the BBC sent a film crew to explore the area and discuss the issues for its 'Newsnight' programme on BBC2, (a supposedly 'serious' news show). The first film that went out, in November 2000, showed some shocking footage of boarded up houses and dereliction. They showed deprivation. For instance, poor old Mrs Herring had a coal fire in her lounge, and had to struggle to carry buckets of coal up from her cellar several times a day to feed it. People who saw those images told me they cried. Salford City Council was distraught too, rushed round to her house and organised the funds to pay for a new gas-fired boiler for her, complete with a brand new radiator for each room. (This was at a time when the grants hadn't even started – but they found the money from somewhere.) Poor Mrs Herring had central heating by Christmas.

But in January of 2001, the next episode of the 'Report from Langworthy' used the same footage of a dear old lady struggling up cellar steps. And in April. And in July. It wasn't true, but it was such a good image. The TV continued to use it, even when it was out of date and, to be honest, a complete lie. Obviously, the BBC2 people had their own agenda, and their own point of view, so they simply used something that was instantly recognisable, tragic and moving. It didn't actually say anything about the plans for regeneration that were being put together, or even if they were working or not. But it sure as hell made the viewers feel bad, about the area and about the residents.

Even more telling, the TV people had taken shots of boarded up streets in October 2000 which they were still using in their broadcasts a year later. If they had checked the footage against reality, they would have seen that some of the houses featured had actually been demolished and weren't there any longer, while some of the streets were completely covered in scaffolding, as builders were starting to renovate the properties. That was obviously too complicated for the media people; far easier to keep up the 'image' of boarded-up streets, even when the true picture was starting to change and, in places, become completely different.

They say 'a picture says more than a thousand words', but a picture of a derelict street only makes sense if it's representative, if the rest of the area is desolate too. If Langworthy is anything to go by, it HAS improved – in parts – and if you took the trouble to walk around the area, you'd now see SOME improvement everywhere, and MUCH improvement in some streets. Well, that's too complex for the media; neither the TV, nor the Press, has bothered to come back and update the story. The image of dereliction was powerful and striking; so much so, that it lingers on with most of the British public. It's sad, but their view of Langworthy hasn't changed much since 1999, when the first TV programme aired. But hey, that's 'News'. A decade of rebuilding and regeneration is less dramatic and less engaging. Shouting is more interesting than talking. It's a shame that the more recent pictures won't make it to the front page, but that's because of the media we pay for in Britain today.

Posted by Mike Scantlebury at 10:26 am