TOO MUCH O’ NOTHING

Switching on the radio this morning, the News is full of outrage (as usual). This time, it’s about women who are born with too much testosterone. It gives them muscle mass and man-like strength. That doesn’t mean they aren’t women - they are - but there’s an ‘unintended consequence’ - if they take part in Athletics events with other women, they always win. Some people say they have an unfair advantage. The International governing body for athletics is asking such women to take hormones to tone down the testosterone and make them more like all the other women who are taking part.

How dare they! (some are saying.). Running and jumping are for everybody, they say. There are only two categories in Athletics - Men and Women. If people are born women, they are entitled to take part in all ‘Women’ events, they say. Really? You’re forgetting - there are actually four categories, because Para-Olympics mean that athletes who have a physical disability go in for Para events, and there’s a Men and Women category for each of those.

Let’s talk about Oscar Pistorius. Before he got taken to court for shooting his girlfriend dead, he regularly took part in Para running races. He has no feet and runs on carbon fibre ‘blades’. That gives him an advantage over Olympians with one leg, for instance, but no notice seems to be taken of complaints there, mainly because he’s on the outside of the mainstream, still in the ‘Para’ category. Now let’s try our imagination. Let’s imagine that Oscar goes to the hospital for new treatments, and is told there’s a new type of blade that might suit him. The blades are even more bouncy. He tries them and sets a new world record for the 100 metres - for all contenders, able-bodied and disabled alike. So, feeling confident, he applies to the regular Olympics team. Do you think they would let him in? Not on your life! Ordinary male athletes would shout ‘Foul’ and complain about ‘unfair advantage’. Poor Oscar would find the door barred.

Meanwhile, back in the world of Female Athletics, (governed by an international body which is practically all men), there are strict rules about drug taking. You aren’t allowed to swallow or inject anything that would give you an advantage. One of the banned substances is Testosterone. If you were a female athlete and tested, and found to have an unusually high level of Testosterone in your blood, you would be excluded and - possibly - banned. So, there are already levels of Testosterone which are regarded as ‘normal’. If you inject to get a higher level, you would be described as a ‘cheat’. If you’re lucky enough to be born with an unusually high level, you can demand the opportunity to compete with ‘ordinary’ women. But you know you’d probably win! Isn’t it cheating? You know you’ve been born with a genetic advantage, (just like the mutant ‘X-men’ with their super powers - and the ‘X-women), but you want to play with the ‘normals’, down there with their physical disadvantages! If an able-bodied athlete demanded to be allowed to compete in the Para-Olympics, would anyone think that would be fair? Or worse, what if a man demanded to be allowed to compete in the Women’s 100 Metres? Why? Because he might win! Is that fair?

The answer is simple. There needs to be a new category, where women with a testosterone level around 2 don’t have to compete with women lucky enough to have a level nearer 10 or 12. It’s been done before! People seem to forget. In the 18th century, a man called Queensberry decided to make rules about boxing. He noticed that if you put a man of six foot six in the same ring as a man of five foot six, the match would be over quickly. So he invented the concept of ‘weights’. Now boxers are categorised. There’s ‘heavyweight’ and ‘lightweight’, ‘fly-weight’, ‘welter-weight’ and ‘light heavyweight’. Nobody thinks that’s odd anymore. Why can’t we have categories for ‘Women at Level 4 or lower’ and ‘Women Level 4 or over’. Sound peculiar? One Doctor commented that recent research seemed to show that men who were taller stood a better chance of winning the short races. Every build, he said, was more suited to certain sports. So, me, with my small and thin frame would do better at long-distance and Marathon running. (If only!) While a sturdily built man would do better at shorter distances. Can we imagine - in the future - that there might be races such as ’100 Metres - Men, six feet and under’ and another face for ‘Men, six feet and over’. It’s possible. Would that be so bad?

It’s not just about being ‘fair’. It’s also about being predictable. When we watch a set of runners hammering down the track and breasting the tape, we really do want to feel that any of them might win. It would destroy all interest if we KNEW that the women on the left - the one with the highest testosterone - was going to win the race - just as they did last week, and just as they will next week. We want a bit of the unexpected! Think about horse racing. Usually, each race has a ‘Favourite’, the one predicted to win, but there’s no certainty. Otherwise, gambling would make no sense! In fact, the categories have already been rigged to allow the most unexpected outcome. You might hear an announcement of ‘The 3-20 from Rotherham’, but after that they might say, ‘For fillies, five years and older’. The next race might be for ‘Thoroughbreds over ten hands’. All those dozens of horses have been put into groups which allow them the best chance of winning - because they are racing against other competitors just like themselves. If you mix them all up, then the males - the biggest ones - will always win. Where’s the fun in that?

Personally, I think if the Sport of Kings has to be organised to make horse racing enjoyable, then something similar could quite easily be put in place for people. What’s good enough for horses, is good enough for us, surely? After all, it’s sport. It’s only sport. It’s activities that have been made up to make life more interesting. Can you remember being young? You know when a friend in the playground would say, ‘See that tree? Let’s run over there. First one to arrive, wins’. We can put the game into a massive stadium and broadcast it worldwide but the principles haven’t changed. In the Primary School you soon learned the important lesson: it was no good racing against Jonathan, because he would always win. It was more fun running with Brian, because sometimes he won, and sometimes you would. That was enjoyable. Let’s keep it that way. Let’s redesign sport to keep it something you actually want to witness. I know it’s no fun talking about hormones. Fine. Leave that to the Ruling Body, but, when they do their best to keep the sporting principles in Sport, then I think they deserve our support. 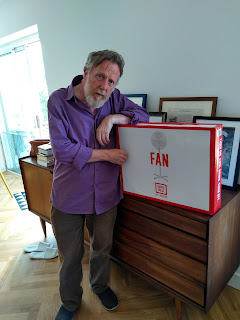 Picture of Mike with his biggest fan