Alternatives to being cut by Amazon

What a great start to the day!

As you may know, I am a crime fiction writer. I construct chiller thrillers set around the metropolitan area of Greater Manchester in the North West of England. I’ve been doing it for years, but every day is different. Like today. Before I sat down and started on the latest chapter of my new novel, I just paused, and thought I would have a quick look at my books on Amazon. There’s a lot of them. Maybe over twenty. That’s quite an achievement, but hey, it’s not all down to me - I’ve had a lot of help over the years. Anyway, I was just scrolling down the list and noticed something odd: many Reviews had disappeared. They’d been cut.

Okay, it takes a while to notice that the train is going off the rails and careering down the side of the mountain, so I didn’t want to react straight away and panic. So I looked, and looked again. After a while, the picture became clear. Some books used to have lots of Reviews, but overnight they’d all disappeared. Other Reviews were still there. Why? Why were they saved? Ah, at last I began to see. The ones that were left were the Five Star reviews. All the others - the two stars, three stars, four stars reviews - had simply disappeared. It was like all the Avengers had vanished and only Robert Downey Junior was left. That was what had happened, I just couldn’t see any sign of Thanos. I didn’t know who the evil mastermind was behind the theft.

Now, don’t take this wrong: I’m not complaining. I mean, I could whine about Amazon and how they keep moving the goalposts, but then, it wouldn’t make sense. It’s not the boys and girls at the online shop that are causing problems - it’s the algorithms, right? Something buried deep in the computer has made a decision, and whoops - all over. These things happen. It’s like waking up one day and saying out loud: ‘Alexa, what’s the weather like today?’ and this voice says, ‘I’m not talking to you today’. But No, it’s no good arguing with Alexa, she’s just a robot. Who cut my Reviews? A robot!

However, after a moment’s thought, I realised one special thing: this is the best thing that’s ever happened to me! I mean, I still don’t know what caused it. Amazon, or the computer that runs the whole operation, had said to himself, ‘Hey, this Mike guy has got a jumble of two’s and three’s. Let’s just erase them, they’re getting in the way’. Zap, gone. Game over. Uh, No, actually. Because look at it. Look! The only things left are the 5-star Reviews. So, Mike Scantlebury, Crime Author, has got a shop-front with selves full of thriller novels. ‘Has Mike got any Reviews?’ you ask. Hell, yes. He’s got a bunch of them, and they’re nothing but Fives. High Five, Dudes!

However, it’s an illusion, of course. Sure, the 5-stars are left, but they’re only attached to a proportion of the books. Meanwhile, some of the books have got no Reviews at all! Lower star Reviews removed? Yes, some books lost all the reviews they ever had, and if they were lower down the scale, they simply disappeared. Uh, Mike, why is that a good thing for you? Because, my Friend, a lot of readers are not using a lot of focus when they scan through the books in the store, looking for something to read. They will catch sight of the 5-star Reviews, I guess, and skim over the books with no stars. Well, okay, I lost their attention for those other volumes, but that’s not a worry for me, because if said Reader likes the look of a ’5-star book’ and buys it, they might like it. If they do, they will get to the end and find one useful thing - a big list of all the other books in the series. They liked the one they’ve got? They’ll buy the next one, or the previous one, or the first in the series. Will they notice it hasn’t got any Reviews? Maybe, but not likely. After all, they’re on a mission - find the next one to buy. Why would they stop and examine Reviews? They know what they want!

So thanks, Amazon. You’ve created a pathway through the forest. We know that most readers are overwhelmed by the mass of trees in front of them, so they look for the ’5-stars’ and that’s like a signpost, an arrow pointing one way and it says, ‘Follow this track’. Once they’re on the track, they may become one of my readers. and then I love ‘em. They will get the chance to join my Mailing List and then they’ll find out about all the Special Offers I make available. They’ll find a link to my website and learn all about me and my world, (which isn’t the ‘Manchester’ you read about in the papers). Once they’re in there, in amongst the trees, they’re hardly likely to stray off the path. Amazon has done what it does best, coralled people into being repeat customers and making the bookshop money. Luckily, that’s also beneficial to writers. Well done, Alexa! It’s a great day. 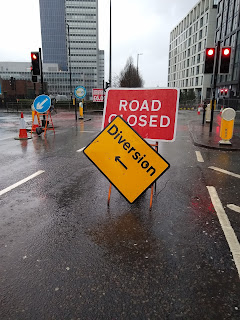 Posted by Mike Scantlebury at 10:40 am